Nike is known for taking a position in debates and is not shy in making its opinions known. Nike knew it would cause massive controversy by using Kaepernick in its latest campaign, but the calculated risk has paid off. When producing content, creatives always say the content has to be culturally relevant, authentic and genuine and that’s exactly what Nike’s content said to its audience. Estimates have shown that the campaign has been a huge success with sales increasing by 31% and Nike’s own share price was at an all-time high on 13 September. Sometimes sticking to your values is risky, and brave. But it pays off. Read the in-depth analysis of how Nike not only weathered the storm with its great crisis management strategy, but increased its value and sales, in ‘Nike: a brand with purpose,’ an analysis by The Social Element’s Strategy and Innovation director, Lisa Barnett.

A Brand with Purpose

Anyone involved in crisis management will tell you that being prepared is the most important undertaking when dealing with the onslaught of a prospective crisis. And the two crises facing Nike and British Airways show how these two corporates braced themselves for a negative backlash but appear to have the upper hand.
Let’s take a look at the Nike’s latest ad for #JustDoIt, which featured Colin Kaepernick and other athletes to mark 30 year anniversary of this campaign. Kaepernick is an NFL quarterback, who knelt during the US national anthem to protest against police brutality and racial injustice. He hasn’t played for the NFL for two years and has filed a lawsuit against the NFL. The other athletes include Serena Williams, LeBron James, Odell Beckham Jr., Lacey Baker and Shaquem Griffin, all known for pushing barriers and shaping conversations on race, gender and ability.

Nike knew it would cause massive controversy by using Kaepernick in its campaign that kicked off on Labour Day, a major US holiday. Within 24 hours, Nike’s Twitter and Instagram accounts saw a massive spike in follower and fan numbers. There were 2 million tweets on 4 September when the ad first aired.  Engagement shot through the roof, although not all of the comments were supportive. Here are some positive comments on Twitter:

I need a new pair of shoes and new socks. I will be buying Nikes. Thanks for supporting Freedom of Speech.

I shopped at Nike for the first time in years. Thank you for taking a stand.

Thank you @Nike and @Kaepernick7 integrity is doing the right thing, despite knowing you’ll be crucified with adversity…I purchased 3 pair today 4 the youth shelter will buy 3 a month to show my support and I’m still not watching NFL until Kaep is respectfully hired!!

In contrast to some negative comments:

HORRIBLE representation of standing for something. I can think of a million other examples that should be celebrated…not this. Shame on you @Nike

.@Nike Due to your support of C.K. in your coming adds, I as an American can no longer support your company. #boycottNike #IStandForOurFlag pic.twitter.com/5JxSMD8SSO

Facebook groups also appeared on the platform with like-minded individuals talking about the ad campaign. One such group has over 4,000 members and there are more than 10 posts a day:

On social media, Nike has chosen to adopt a blanket non-engagement approach and has not engaged with any of the positive or negative comments. It has been engaging with normal customer service issues and queries, as though it was a normal day in the office. The social media team would have agreed on this approach when it was preparing for this campaign. The company wanted its ad campaign to raise awareness with its target audience of 18-34 year olds and felt that the ad did the talking and it didn’t need to engage further.
Although, interestingly, Nike has produced some proactive content when it emerged that some people were burning their Nike products #Justburnit and #boycottNike. It produced a print ad with instructions on how to burn its products safely: 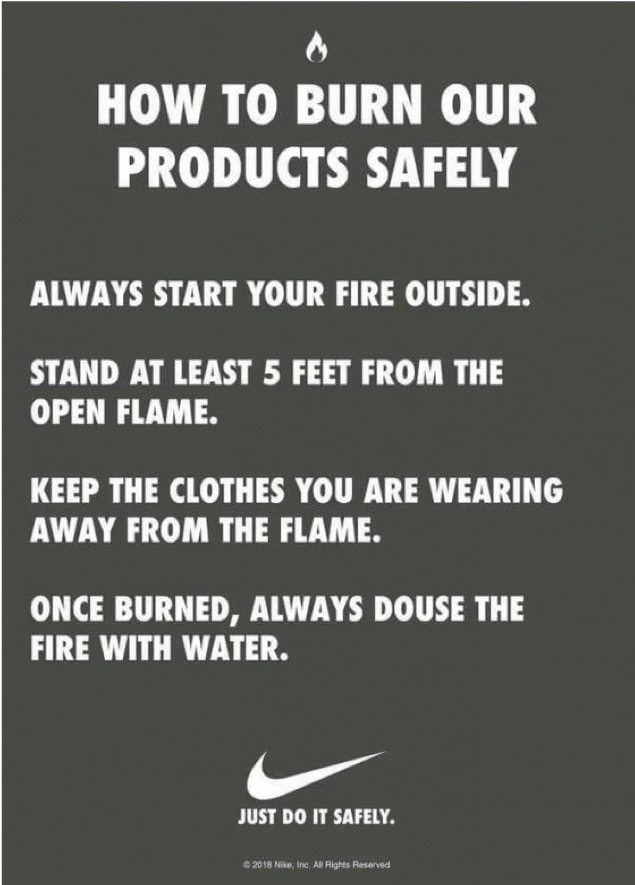 Given that Nike knew it was courting controversy then it would be safe to assume it had produced this content beforehand. Typically when a brand is prepared for a crisis, it would identify all the potential outcomes and have the content ready so it can respond quickly to any issues. Nike knew there were would be protests and decided to take a tongue in cheek approach to helping people protest safely, even changing its tagline to reflect that.

Nike is known for taking a position in debates and is not shy in making its opinions known. While this latest campaign was a massive risk for Nike, the calculated risk has paid off. It carried on with business as usual and let the two sides of the debate fight it out among themselves. It produced an ad that got people talking and raised awareness among its younger generation of customers. When producing content, creatives always say the content has to be culturally relevant, authentic and genuine and that’s exactly what Nike’s content said to its audience. Estimates have shown that the campaign has been a huge success with sales increasing by 31% and Nike’s own share price was at an all-time high on 13 September.
The importance of strategic thinking around the outcome of this campaign is something that Nike has paid a lot of attention to. And it decided that the calculated risk of alienating some of its audience outweighed the over benefits of raising awareness around its messaging campaign.

Tomorrow, I’ll look at a very different crisis action – from British Airways, a brand that actively tries not to court controversy, but had to trigger its crisis plan in the wake of a data breach last week. 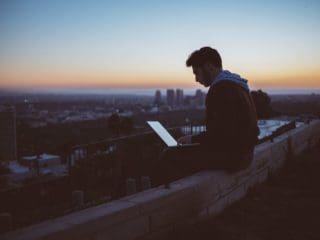