Dominators of your shopping list, the main contributor to the recycling bin, FMCG products range from toilet cleaners to your preferred biscuit for tea dunking. In short, FMCG products are everywhere.

Many of our favourite brands such as Colgate (Colgate-Palmolive), Pampers (Proctor & Gamble) and Terry’s Chocolate Oranges (Mondelez) have stood the test of time thanks to their ever-changing technology and improved recipes. Take a look in your home – I’ll bet you’ll find one item that wasn’t available in supermarkets a year ago, in addition to one item that your parents put out on the table or kept in the cupboard when you were younger. (Jammy Dodgers, anyone?)

Recipes and packaging aren’t the only things that brands have changed; the FMCG sector is gradually dipping its toe in the social media waters.

According to Headstream’s Social Brands 100 just 11 FMCG brands made it in to the top 100. The ever-popular Innocent clinched the No.1 spot for the sector, and ranked No.6 in the top 100.
Headstream reported that, “Although food and drink FMCG brands tend to score above average on customer support metrics, they really stand out on engagement rates, with food, drink and alcohol brands achieving above average scores on Twitter and Facebook.”

For the past three months, Coca-Cola has come on top as the FMCG brand according to the size of its community. 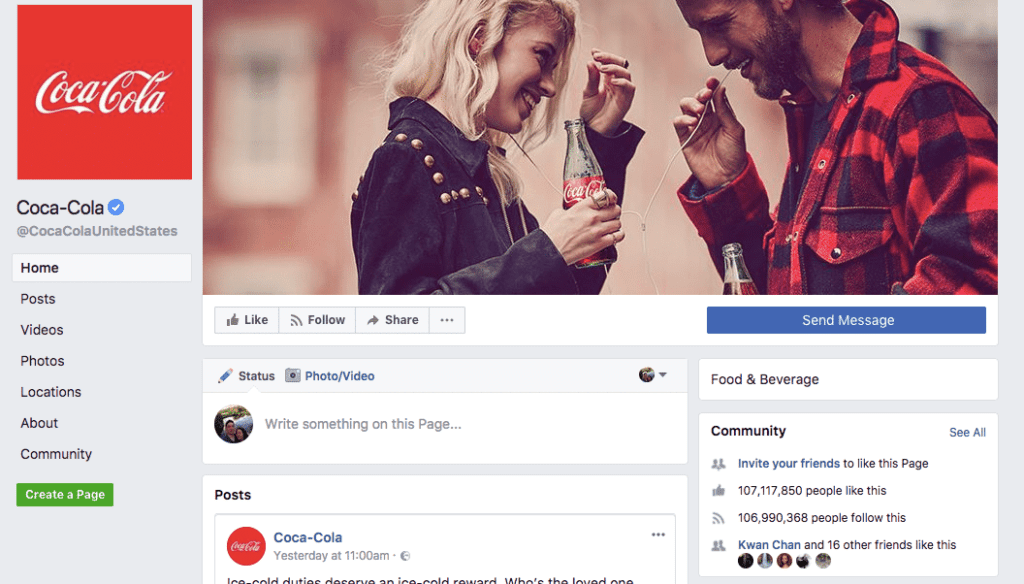 With 76 million dedicated fans on Facebook, with an additional 2.1 million on Twitter and 85,000 on Instagram, Coca Cola is a great example of how to produce through-the-line campaigns.
I daresay we’ve seen Coca-Cola bottles on our Facebook timeline, Twitter dashboard, and Instagram feed.  I’m sure I’m not alone in envying the 150 names that were picked to adorn a Coca-Cola bottle, or who felt like they were missing out from using #shareacoke.

The 2013 Cannes Lions dubbed the company’s latest ‘Share a Coke’ initiative “the most successful campaign in decades”, and it’s no wonder why. Apart from a 2.75% sales increase in the UK alone, the campaign emphasises the longevity of the brand, the accessibility of the product and the underlying message that most people have shared a Coca-Cola with a loved one.

Coca-Cola’s message is clear and simple, friendly and laidback; its community is interactive, international and positive. Coca-Cola is careful not to place emphasis on where you’re enjoying your drink, but who you’re sharing your drink with. This allows the community to interact with their posts, regardless of their whereabouts. 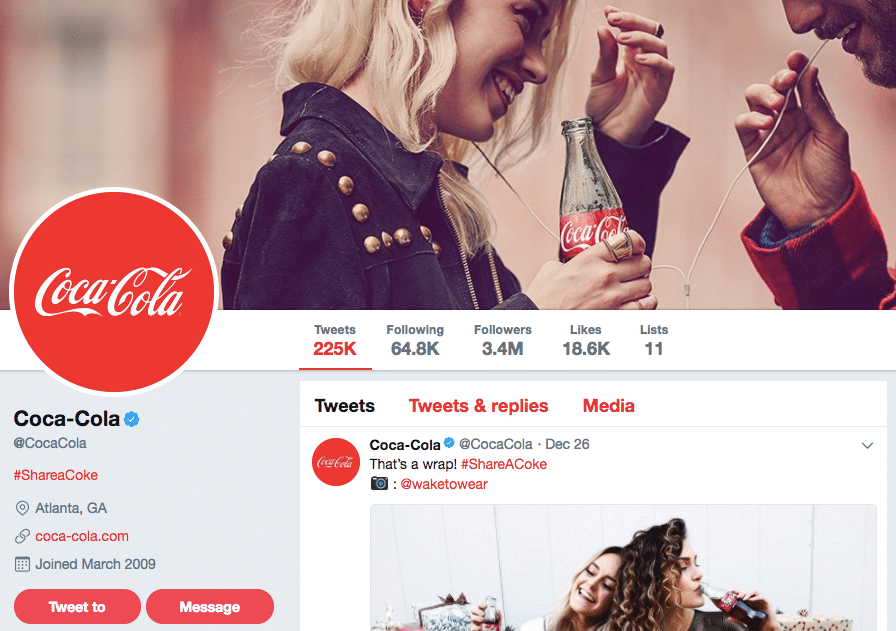 Users are valued on Coca-Cola’s page, the brand’s content places emphasis on needing your help, your opinion, and your involvement. It does this without sounding desperate or forced.

This could be the perfect Santa picture! @CocaCola #ShareACoke pic.twitter.com/Ny1KfbilOm

Coca-Cola’s through-the-line campaign naturally drives conversation back to social; we, the consumers, are doing the rest. According to Brandwatch, #shareacoke has been used over 29,000 times on Twitter while Marketing Week reported that brand sentiment has risen from 9.6 to 12.4. We’re tweeting every time we find a bottle with our names; Instagramming these as proof and boasting on Facebook about it.

Red Bull’s social media is miles away from the “Ooooh, Red Bull gives you wings” TV ads. The brand is confident about its own understated cool. It is aspirational and accessible; instead of thinking “Well there’s no way I’ll ever ride a wave like that guy”, you think “That’s incredible, I want to learn how to surf”.

Red Bull trusts its community to make the connection and understand the ambition. It sets the tone for the self-assured, fearless individuals it hopes to attract to the page to add to its 40 million strong Facebook community.

Red Bull chooses not to promote its products on Facebook. Instead, every single post is to the point and self-assured, accompanied by breathtaking lifestyle images. That’s a bold move.

So how does Red Bull drive conversation on its page? Simple – by casually throwing a person to the next hold while rock climbing.

The Red Bull Stratos ‘Space Jump’ is an event that has firmly been cemented in the minds of twenty-somethings. Our parents had Michael Jackson, our grandparents had Apollo 13; we have a man who fell 39 kilometers to earth.

A PR stunt as risky as the Space Jump needed fan support, so Red Bull created a  Facebook hub. This ‘broadcast station’ delivered insider access to updates and news. Not only did a stunt like this guarantee fan growth, increase reach and boost the brand’s footprint, it gave Red Bull rich content for future use.

The video of the actual event was streamed live across 50 countries, racking up 52 million views on the day.  Sales increased by 17% worldwide and broke a YouTube record after gaining 7 million views.

Oreo is playful and cheeky – who said cookies are only for kids?

Nostalgia is the source of Oreo’s global appeal. Take a page that posts silly pictures, memories of childhood games and makes you yearn for summer afternoon dunking Oreos in milk– why wouldn’t you want to be part of that community?

Oreo’s ageless sense of appeal lies in the fact that its assets are fun and playful. It’s little wonder that its 34 million community of biscuit-lovers engage on a daily basis. What could possible make this better? Oreo interacts with their users to create conversations – conversations about biscuits, all day, and every day.

Let’s take its ‘Daily Twist’ campaign, which celebrated 100 events over 100 days. For Gay Pride, the biscuit-maker inserted five milky layers on top of the classic white cream, and coloured each one differently to represent the Gay Pride flag. For the Mars Rover, it coloured the milky layer red and replicated track marks.

By creating relatable, humorous branded content, shares went up by 280% during the campaign, resulting in a 110% increase in user engagement. The ‘Daily Twist’ shows other FMCG brands that it’s possible to be on topic, while producing branded assets, without compromising your tone of voice.

What challenges do FMCG brands face on social media?

The biggest issue for FMCG brands is how to track the correlation between social media activity and in-store sales. Coca-Cola’s ‘Share A Coke’; BIC Soleil’s ‘Win a trip to LA’; Dairylea’s ‘Mooing Cow’ campaigns all drove in-store consumers to online activity. Does it work the other way round?

While coupon use – paper, online or mobile – is always a staple of supermarket shopping (ASDA’s Del Boy Deals on Facebook are legendary), FMCG brands are leading the way with gamification as a way to track ROI while rewarding their community for participation.

On Facebook, social loyalty network Fanzy’s app is a front-runner. Brands create fun, interactive challenges for users to complete in order to unlock badges for prizes. If you share a photo from a brand page, the number of likes received on your wall could be the difference between winning a packed lunch box or money-off coupon. It’s like Pokemon, but on Facebook. It’s great if your community likes to boast about its loyalty.

It’s word of mouth at its finest and it gives brands the chance to see how active their community is willing to be; with apps like Fanzy, if your community wants to redeem a reward, it will.
As FMCG brands develop their tone of voice and platforms improve their features and apps, it’s easy to see that this sector will be leading the way on social. Your friends are on social channels, so why can’t your favourite brands occupy the same space?

Read more about how The Social Element gathers social insights to bring to the table. 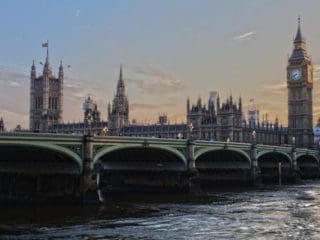 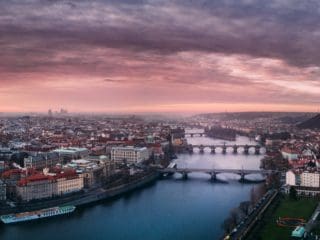