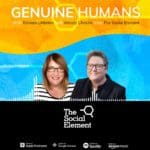 Genuine Humans
Edward Pilkington: Take A Stand For What You Want To Do

Edward has worked for Diageo for most of his career, but in that time, he has seized most of the opportunities he could – working in various roles around the world. From Australia to the Caribbean, to Amsterdam and New York, Edward has jumped at every opportunity to experience the world and develop his career.

He’s been lucky to have fantastic bosses throughout his career – people who have shown that they believed in him and given him opportunities to thrive on his own initiative. Now, Ed does what he can to give those he manages the same opportunities.