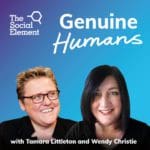 Genuine Humans
Lee Goodger: It All Began With A Holiday

This week on Genuine Humans, Tamara and Wendy are joined by Lee Goodger, Head of Social at Huawei.

Lee’s empathetic and grounded leadership style shines through the conversation. Childhood trips abroad with his grandad helped to spark his passion for marketing, and he went on to be inspired by a series of senior (and junior) colleagues who showed him the value of being a generous and compassionate leader.

He’s passionate about gender equality – something he learned doing ‘A’ levels at an (almost) all girls’ school – and cites one of his proudest accomplishments helping close the gender pay gap while he was working for Shell.