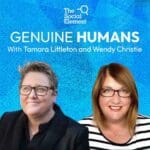 In our very first episode of our new podcast, Genuine Humans, hosts Tamara Littleton and Wendy Christie talk to Virgin Red’s marketing and digital director, Lee McGuffie, about his extraordinary and fascinating career journey. Lee’s route into marketing was anything but traditional: he’s been an internationally-renowned DJ (playing in Ibiza and at Glastonbury) , been signed to a record label, and took a year off to travel the world.

Lee’s story is driven by seizing opportunities, following his passions and thriving under empathetic and inspirational leaders such as DARE founder Mark Collier. He talks about his passion for leadership, the importance of supporting his team, how he survived a six-month hospital stay in the middle of his career, and why he’ll never settle.