A Crisis Can Hit Any Brand, At Any Time.

In this second of two articles series looking at the impact of the #MeToo movement on social media, our analyst David Woods-Holder examines the effect the unfolding events have had on Netflix, after they became embroiled in the story. He will also look at the ways brands can ensure that they are prepared when such a crisis hits.

2017 saw an abundance of significant stories hit the news, each of which has changed the global landscape in one way or another. Social media is intrinsically part of our lives. It is only natural that it would play a role in shaping the way that these stories developed and evolved.
On 5th October when the New York Times published their article carrying decades of allegations of sexual harassment against producer Harvey Weinstein, it is unlikely that even they could have anticipated the domino effect it would have. Not only the film industry was affected, but the world.
When looking at a timeline of conversations mentioning sexual harassment on social media (UK), we can see that the subject was receiving little coverage up until the NY Times exposé:

A look at Netflix

When Anthony Rapp came forward with his accusations regarding an advance made at him when he was 14 by Kevin Spacey, the news was doubly poignant for streaming service Netflix. Not only was Spacey the lead actor in one of the service’s most successful shows, House of Cards, Rapp is a prominent actor on Star Trek Discovery, another of the company’s productions.
As pointed out in MSN’s article on the matter, Netflix has a fairly chequered history with harassment. They had signed a deal to exclusively stream Chris Brown’s documentary ‘Welcome to My Life’, despite the singer’s “rarely denied” abuse of Rihanna. Some took to social media to vent their anger at the deal: 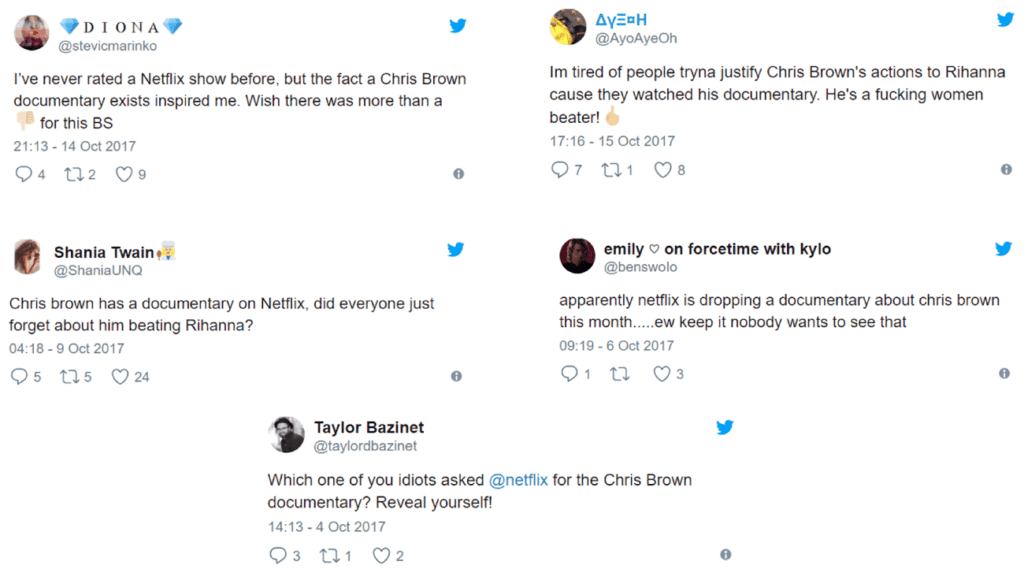 The #MeToo movement was also used to point out that with this partnership, Netflix was going against the current trend of disassociating itself with artists known or accused of abusing others:

But for all the backlash, there were just as many fans of the singer praising the documentary:

So in this instance, it would appear the deal did little to tarnish the streaming service’s reputation.

Netflix’s reaction to the Kevin Spacey story breaking was quick and incisive. In general, there was little negativity aimed at the company itself when it released a statement that production had halted on ‘House of Cards’. The statement also confirmed that Netflix were severing ties with Kevin Spacey. Despite universal agreement on Spacey’s leave, some felt cancelling the show entirely was unnecessary. The show is slated to featured a very strong female lead to fill the void of his immediate departure:

Others agreed that Netflix had no options:

Netflix’s swift cutting of ties with Kevin Spacey led to many asking why the same punishment hasn’t befallen other Netflix associated celebrities who are also embroiled in sexual harassment allegations. Users included #MeToo in posts about Danny Masterson, who stars in Netflix’s ‘The Ranch’, and Louis CK, whose content is still available on the platform. 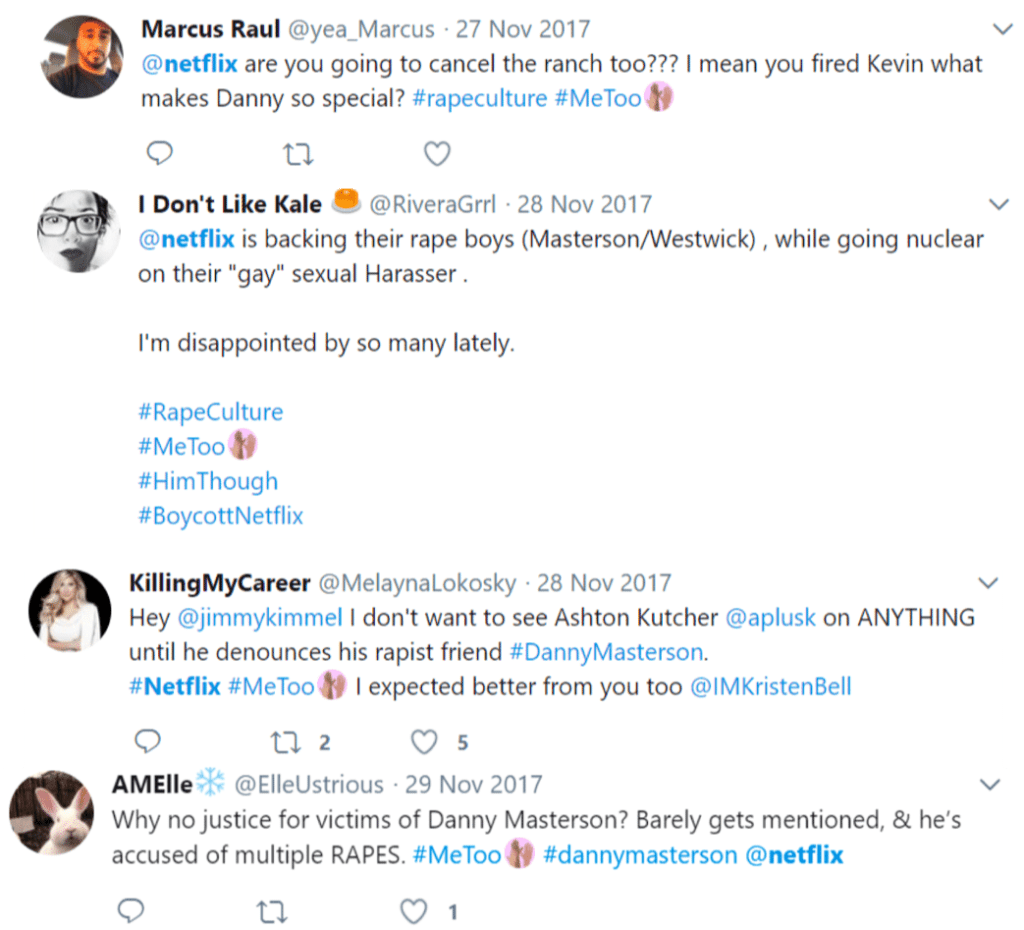 Since outrage against Danny Masterson, Netflix has announced it will be removing him from the next season of ‘The Ranch’. Although it’s not definitively the outpouring on social media and association with #MeToo were the driving force behind the decision, it was likely a factor in the company’s decision.

It can be seen that a majority of the social media coverage regarding sexual harassment and Netflix was neutral in tone. Despite being heavily involved in the saga, the brand’s reputation on social media was not affected.

In fact, negative sentiment towards the brand on social media only increased by 1% in the Jul-Dec 17 period. With the Kevin Spacey allegations, mentions of the brand rose from 34 million in the first half of 2017 to 43 million in the second half.
The profile of Netflix as a brand has never been stronger. The service added a record 8.3 million subscribers between October 1 and December 31 2017, bringing its total subscriber count to 117.6 million. It finished 2017 with record profits.

So what about other brands…

Whilst it might not be possible to predict exactly when a crisis will occur, being prepared goes a long way to help minimize the impact of a social media crisis. Netflix succeeded in handling the breaking of the Kevin Spacey story by being quick off the pulse. There are several steps that can be taken to allow such swift action.
Identifying issues in real-time as they emerge on social media is the first step. To achieve this, obtaining a high-quality media monitoring tool is key. Regular monitoring of social media traffic will allow for spikes in mentions of your brand to stand out immediately. Nine times out of ten, an upturn in social media conversations will be a reason to celebrate. Having an accomplished monitoring team will allow for swift identification of the exception. When a brand crisis hits, social media is where you’ll hear about it first. You need a team who can execute your social media crisis management quickly and effectively.
Having defined parameters for when to initiate a ‘crisis situation’ will allow for the most effective handling of the scenario. This includes decisions such as when automated alerts should be sent to the monitoring team indicating that attention is required, to how quickly insight reports should be created and circulated to executives.
One further step that can be taken is to utilise crisis simulation tools such as Polpeo, which can help your brand prepare for a social media crisis with real time, immersive crisis simulations to help you develop and assess your team’s capacity to respond effectively.
For more information on preparing your brand for any crisis that could occur you can visit https://thesocialelement.agency/ or email info@thesocialelement.agency. 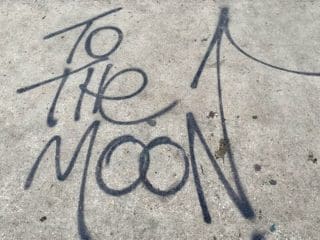 Next Post (n) Why I’m going to SXSW: Our CMO Ashley Cooksley On the Value of South by Southwest